After graduating from McGill University with a degree in Film, Grace Glowicki moved to Toronto to pursue her acting career. The city has been good to her! She has had principal/lead roles in various feature films such as Hunter Green, Bi-Polarized, and The Oxbow Cure. Most recently, she appeared as a reoccurring principal in Omega, a web-series for Machinima Inc. Grace is ecstatic to be a part of the Nightrunners team and cannot wait to bring her character to life.

Mandi Nicholson grew up in Calgary Alberta, and started her acting career at a young age when she started to perform in many middle and high school productions. In her senior year she won the Outstanding Acting Award in the Alberta High School Drama Festival. Upon graduating from high school, she was accepted into the American Academy of Dramatic Arts. She decided to take the leap and move to Los Angeles to pursue her acting career. After a two year intensive training progra

We are thrilled to announce that we have cast the 2 Canadian lead roles in the film. Congratulations and welcome to Mandi Nicholson and Grace Glowicki! Watch here for more info on each of these talented young women. But for now, welcome, Mandi and Grace! We are very excited to have you on this adventure with us!

And now, NIGHTRUNNERS team, please take a moment to read our first column on the Huffington Post. http://www.huffingtonpost.ca/rowan-nielsen/fund-a-film-aid-an-island_b_2078533.html

If you have peeps who are without food, clean water or shelter due to Sandy, by all means, support them. But if you were relatively unscathed, please consider supporting these folks in Kenya who NEVER have reliable access to food, clean water or shelter. Follow this link to find out how to help achieve what should already exist for everyone. http://www.indiegogo.com/nightrunners-kenya-thriller 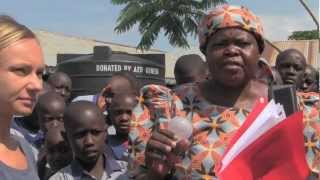